Inside the top room of the FPC Bell Tower hang 25 bronze church bells. These bells were cast at the Royal Eijsbouts Foundry in Asten, Netherlands. The company was started in 1872 by Bonaventura Eijsbouts who was a trained watchmaker. He began a small shop and started making tower clocks. His ensuing success resulted in the establishment of a larger shop in 1905. His 15-year-old son, Johan, joined him in 1893, and despite his young age, he introduced striking and swinging bells to the family product line. The company slowly developed worldwide fame.

The first three Royal Eijsbouts bells were installed in the church bell tower in 1982, given as memorials to Harriet J. Gaston, Walter J. Baird, Miss Glenn Carter, Mildred McDaniel Cooper, J. Richmond Hargis, Charles J. Osborn, C.V. Baker, Mary Williamson Stokes, Walter H. Thaxton, and Mr. and Mrs. Curry Vaughan. The other twenty-two bells were given to the church in 1994 and 1995 by Judge Rodney V. Ahles in memory of his wife, Imogene Ahles. The smallest bell weighs about 75 pounds and the largest weighs approximately 950 pounds. The bells provide two octaves, allowing songs to be played with ease and fluidity. A Schulmerich electronic control system provides automatic playing of the bells. The bells chime the hour and half-hour between 8 a.m. and 8 p.m. Monday through Saturday. Seasonal hymns are played at noon and 6 pm. 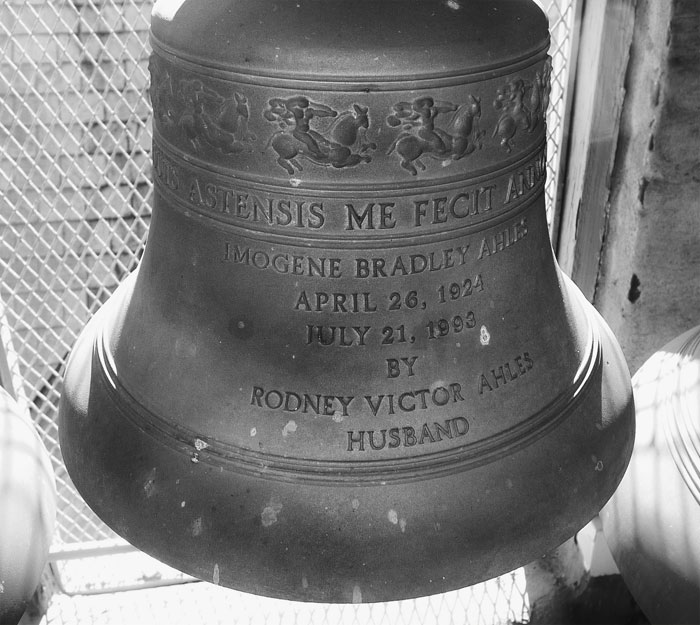