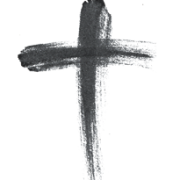 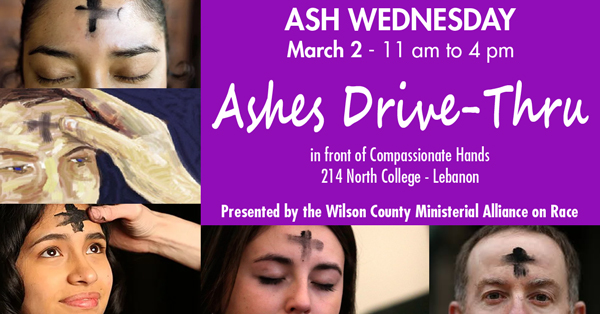 For Ash Wednesday this year, under the auspices of the Wilson County Ministerial Alliance for Race, I organized an “Ashes Drive-Thru” for the community. I enlisted ten pastors from Lebanon to stand in front of the Compassionate Hands Hope Center (just north of the Square) on Ash Wednesday to offer the ancient ritual of the Imposition of Ashes to anyone who walked up or drove up. (Most drove.) This was, I believe, the first time Lebanon has experienced an ecumenical Imposition.

It turned out to be a beautiful, sunny day which stood as a pleasant contrast to last year’s Ash Wednesday ice storm. It was almost too hot, but no one complained. We were happy not to be cold and enjoy the first sign of Spring. We brought our preaching robes, but we each decided it was simply too warm for that extra layer.

Remember you are dust,
and to dust you shall return.

Ashes Drive-Thru proved to be a wonderful opportunity to do ministry on the streets of Lebanon. Each pastor commented on how meaningful it was for them as clergy to interact with these drive-thru “parishioners.” In addition, each person who attended appeared to be enormously appreciative of the opportunity to receive ashes.

For some, it was their first time; others were well acquainted with the ritual. One woman told me that she had grown up Catholic and that she was on her way to Cincinnati to see her sister who was scheduled for surgery the next morning. The woman didn’t feel comfortable attending mass and was greatly appreciative of the opportunity to receive ashes and prayer. She was genuinely worried about her sister. Another woman told me that her mother had called and was upset that the daughter had skipped noon mass. The daughter spotted our event on Facebook and rushed over. One couple was staying at their house on the river and came for ashes simply because it was closer than driving back to their church in Franklin. One young woman told me she was Baptist and had always wanted to experience receiving ashes. One man came and then returned in the afternoon with his three sons. One person that I had asked if they had received ashes before simply replied, “No. I’m Protestant.”

I fully intend to organize the event again next year. I hope that it will become a local tradition.