On March 8, 2020 B.C. (Before COVID), the status of technology in the FPC sanctuary could best be described as “limited.” Our audio system consisted of a pulpit microphone connected to an aging PA system and a couple of crotchety wireless mics with an affinity for feedback. Several years ago, we did replace the spherical ceiling speaker with something less ancient. Video capabilities in the sanctuary were non-existent.

Sporadically, over the past couple of years, we have entertained the notion of upgrading the sound system but there has never been suitable enthusiasm to countervail the headache and expense of such a project.

On March 15, all that changed when COVID forced us to close the church to in-person worship.

On March 22, we resumed worship but only online. 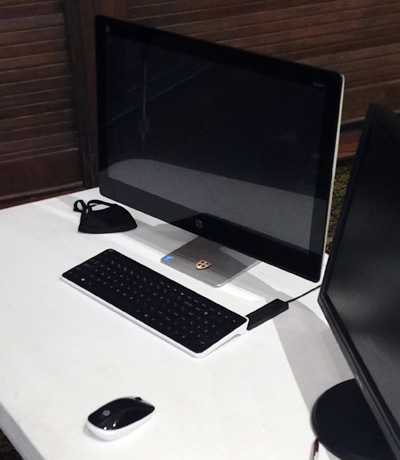 Congregations that had previously invested in online video worship were light-years ahead of us (and every church like us). If we wanted to reach our people we needed to learn how to climb the audio-visual mountain… and  quickly.

For the first week of online video worship we employed a camcorder loaned by JD. That setup was basic. The audio and video signal from the camera hooked into Michael’s Mac computer which sent a feed out to Zoom and Facebook. Without Michael’s expertise, we may not have made it even that far. The video quality was fine but we were utilizing the camera’s microphone to capture audio from the pulpit and organ. That didn’t work so well.

At Allen Vance’s suggestion, we purchased a USB microphone to by-pass the camera audio. You saw that mic on the pulpit/table for several weeks. While it did an excellent job of picking up our voices, as you all noticed, it failed at capturing music. 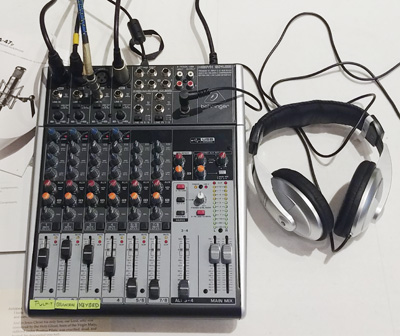 Next, I purchased a PC (second-hand from another church) so that Michael could reclaim his personal Mac. Then we bought an audio mixing board and hooked it up to several conventional microphones (ones the church already owned). I appealed to Mark Fain to demonstrate to us how to use this device. The mixing board was a huge improvement for our sound output.

There remained the issue of the organ. None of our mics were designed to accommodate the wide range of sounds and frequencies created by such an instrument. 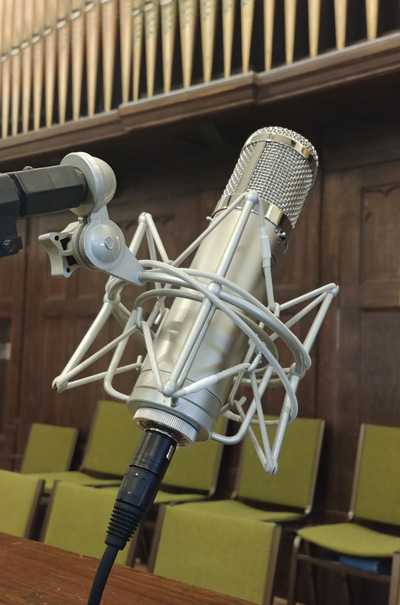 I went back to Mark for guidance and he made some inquiries and returned with the recommendation that we purchase the WA-47Jr Microphone made by the Warm Audio company out in Texas. We set this up this last week and, as you could hear, the results were stunning with the organ coming through loud and clear.

We’re still not done. We can’t keep JD’s camcorder forever so we purchased a Canon XA11 as well as a small GoPro. We have also ordered a video switcher which will permit up to four video inputs. When that arrives, we will be able seamlessly to switch between three cameras and a computer input for graphics. When that gets installed you won’t know if you are watching FPC or CNN.

And, because we once again have a congregation in the pews, we continue to use the old PA system.

I want to thank Cal Clark and Jim Stueck for being our technical team on Sundays. Cal runs the sound board and Jim handles the graphics. 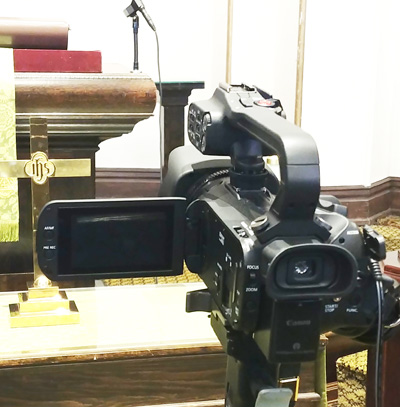 Before COVID, none of us had much audio-video knowledge or experience. But we’ve been learning. Each week presents a new challenge. For now, I think we’ve got it worked out. It looks like online worship at FPC is here to stay.