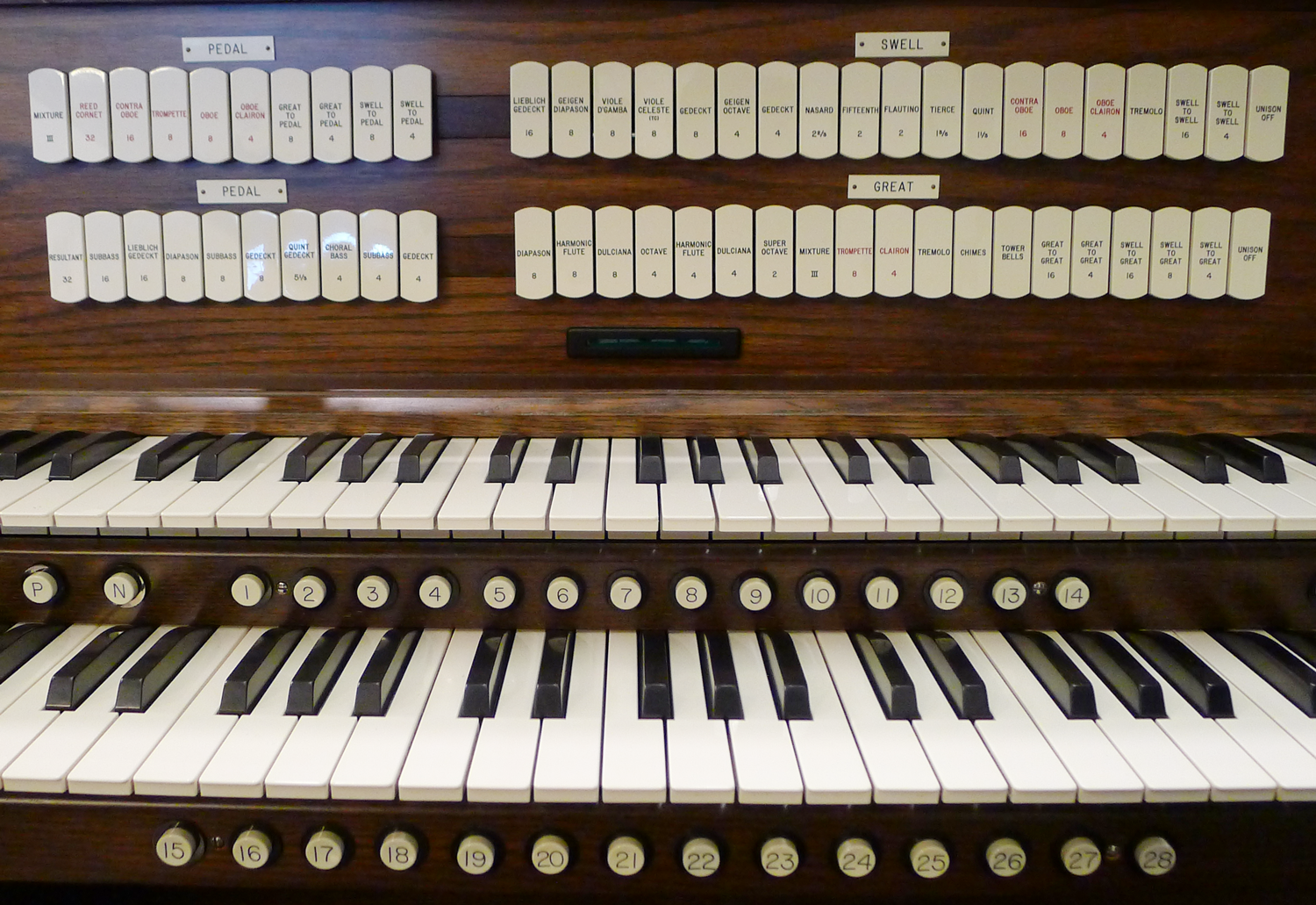 The primary purpose of the sanctuary organ is to enhance the worship of God – through serving as an instrument to support congregational singing, to accompany the choir, and in providing resources for magnificent service organ music.
The organ has two manuals (keyboards) and a pedal-board which control three divisions of pipes called the Great, Swell, and Pedal organs.  There are 16 ranks of pipes representing 1,115 pipes, and a set of chimes with 21 bells.  The pipes vary in length from a couple of inches to 16 feet.  Air for the organ comes from a blower which is tucked away in an empty coal bin in the basement of the church.  The air is pumped through reservoirs which regulate the pressure.

The first pipe organ installed at First Presbyterian was built and installed by Henry Pilcher’s Sons (Opus 726) in 1911 at a cost of $3,000.  This was a tracker (mechanical action) instrument and the façade pipes from this instrument are still visible in the sanctuary today.  This organ remained in service until 1955 when a new pipe organ was purchased from the M. P. Möller Organ Company of Hagerstown, Maryland.  The cost of this organ was $16,000.

The Möller organ (Opus 8786) used electro-pneumatic action, meaning that electric circuits were used to trigger air-operated valves to admit air into the pipes as compared to the previous organ in which the valves were connected to the keyboards with a mechanical linkage.

In addition to regular tunings and maintenance of the Möller organ, additional ranks of pipes have been added at various times.  The 8’ Great Trumpet was added in 1977 by the Milnar Organ Company of Eagleville.  Milnar also added the Great III Mixture in 1985.  These additions brought the total number of ranks to 15.  [Mixture stops are designed to be used in combination with other stops and sound the upper harmonics of each note on the keyboard.]

In 2016, Barger and Nix Organs of McDonald, Tennessee, was selected to renovate and further update the Möller pipe organ.

The visible pipes in the Sanctuary are from the 1911 organ and are no longer used to produce sound.  Today’s working pipes are out of sight behind the decorative ones and are located within two large chambers, or rooms.  The front walls of these chambers consist of large louvered shutters which allow the volume of the organ to be varied as they are opened or closed.

Future projects envisioned for the organ include restoring the facade pipes to playing condition and making the 25 bells in the church’s tower playable from the organ console.